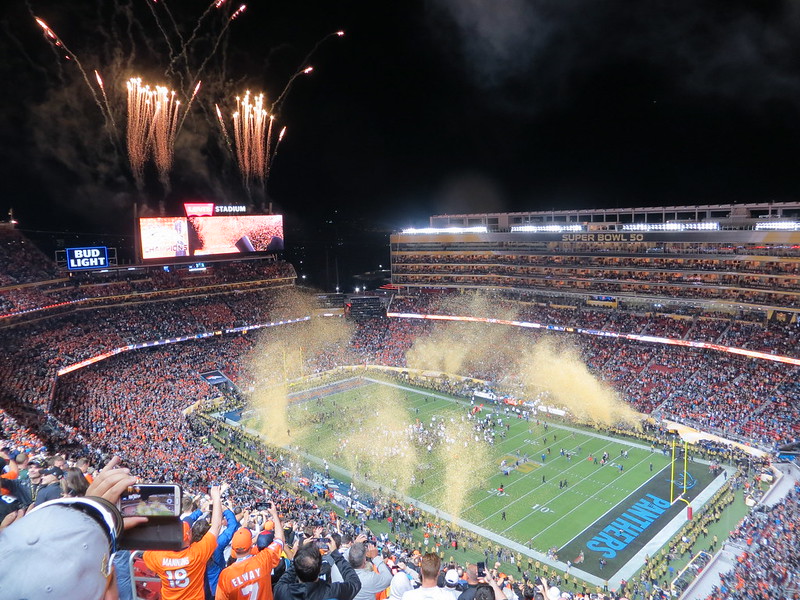 The game was scheduled for 7 February 2016 at Levi’s Stadium in Santa Clara, California.
All the Super Bowl events from the past used Roman numerals, but as sign of celebrating 50 years since the first Super Bowl, the NFL wanted this game to be a special one, so they used Arabic numerals. The stadium was elected by vote, and in addition to the Vince Lombardi Trophy, the winning team received a 30 kg 18-karat gold-plated “50”. That must have been a heavy prize.

The game was televised by CBS in the United States, and during the telecast CBS introduced the Eye Vision 360 feature, offering a 360 degree view of the play. That was pretty cool. The feature came with bullet time effects making the game even more enjoyable to watch. An average of 111.9 million people watched the game, making it the third most watched program in American television history.
Super Bowl 50 was broadcasted internationally in Brazil, Australia, Canada, Finland, Denmark, France, United Kingdom, The Netherlands, Ireland, and other countries.

The Spanish broadcast was offered by the ESPN Deportes since CBS didn’t have Spanish language cable network. Instead, CBS provided many cool features of the telecast and a digital stream via their sports website and the CBS Sports app on tablets, and other digital media players.
On the radio the game was broadcasted nationally by Westwood One in North America and internationally, in the UK, by BBC Radio 5 Live and 5 Live Sports Extra.

The second quarter brings 7 points to Carolina Panthers by a 1-yard touchdown run. At this point Denver Broncos leads with 10-7 points, until Brandon McManus scored a 3 points 33-yard goal. The first half ended with a score of 13 to 7 points for Denver Broncos.

Brandon Mc Mannus scores again in the third quarter, adding 3 more points to the total score. Carolina Panthers is losing ground in front of Denver, but in the last quarter the team manages to score 3 points. Even so, Denver Broncos overwhelm them with a winning touchdown run by C.J. Anderson.

Final Score was 24-10 for the AFC champion Denver Broncos.

Here are the game highlights:

The Media Day was moved to Monday, 1st February in the evening. This is an unusual shift from the usual Media Day on Tuesday, but fans were still able to watch the interviews from their stands. And they got their Media Day Gift Bag containing a radio to listen to individual interviews with the players.

The NFL Experience was an event that celebrated the sport’s history and the amazing Super Bowl. The fans had to purchase tickets and they had the opportunity to meet their favorite NFL players and have autographs from them. The event was open every day of the entire Super Bowl Week.

Tuesday, 2nd February took place the NFL Player Party at Mayes Oyster House from 10 pm.
Wednesday 3rd and Thursday 4th February the event “A Concert of Champions” was held from 11 pm.
Saturday and Sunday the fans could attend special events like the Super Bowl Breakfast and the NFL Alumni Official Game Day Brunch where they could meet their favorite players and have autographs after enjoying a nice meal.
CBS broadcasted the NFL Honors Award Show at 9 pm on Saturday, and on Sunday, the game started at 6:25 pm.

Best Moments Of The Super Bowl 50 Beside The Big Game:

Bruno Mars came back to the Super Bowl and performed and astonishing concert at halftime together with Mark Ronson. Coldplay opened the halftime show and performed “Yellow”, “Viva La Vida”, “Paradise” and “Adventure of a Lifetime”. It was nice to see Beyonce joining Bruno Mars and together with Coldplay they performed very beautifully “Fix You”/”Up and Up”.

The ads were favorited by the Super Bowl fans and just like in the previous years, they were fun to watch. So here are 5 great Super Bowl 50 commercials: