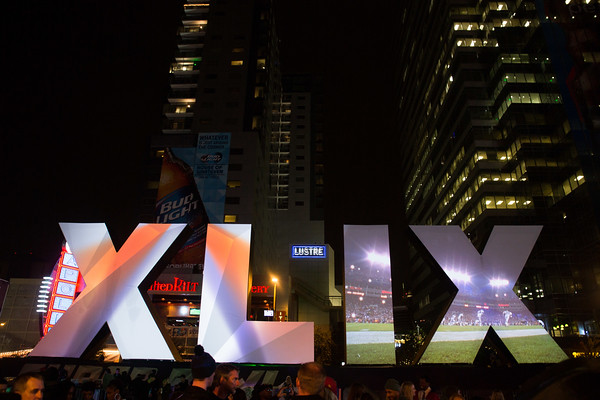 The big game was played on February 1st 2015 at the University of Phoenix Stadium in Glendale, Arizona. 2015 brings Seattle Seahawks, the champion from Super Bowl XLVIII against New England Patriots.

The game was broadcasted in over 180 countries. In the United States it was televised by NBC which also made a Spanish language telecast on channel NBC Universo. An average of 114.4 million people watched this game, peaking at 120.8 million during the last quarter when New England Patriots scored the last points and won the game.

NBC Sports offered a digital broadcast on PC and NBC Sports Live Extra app on tablets. On radio the game was broadcasted nationally by Westwood One, and internationally in the UK by BBC Radio 5.

The game was absolutely a tight game. The NFC champion from last year, the Seattle Seahawks lost to the AFC champion New England Patriots with only four points difference. There was a lot of tension, conflicts and even fights between the players of the two teams. Take a look at this last minute massive altercation:

The first quarter brings a broken wrist to Jeremy Lane after trying to escape Julian Edelman’s tackle. Despite all the efforts to a touchdown both teams failed to score this quarter and the game remained scoreless.
In the second quarter the game started heating up. Both teams managed to score 14 points each.
Third quarter was all Seattle, scoring 10 points above New England Patriots.
Last quarter was the most intense and had a great deal of suspense. When the Seahawks decided to throw the ball the Patriots intercepted and that’s when all ended for Seattle. New England scored and sealed the victory. The game ended with a 4 point difference, 28 for New England Patriots and 24 for Seattle Seahawks.

Here are the game highlights.

This Super Bowl week was full of many fun events for the fans. They went on Tuesday 27 January at Media Day, one of the most awaited events, and the fans who purchased tickets were able to watch the interviews from their stands. Also on this day, they received a Media Day gift bag which contained high quality audio files with interviews with the players from both teams.

On Friday 30 January the fans had a full day. Starting at 8:30 am until 9:30 pm, they went to see a press conference with the teams coaches Bill Belichick and Pete Carroll, join other fun events like Super Bowl Gospel Celebration and Glendale Chocolate Affaire, and have a nice autograph session from their favorite players.

Saturday 31 January was an amazing day. From Arizona Super Bowl Run Series to autographs, everyone enjoyed every bit of the Super Bowl Week. There was only one more day the fans were anxiously waiting for, the Big Game Day.

Sunday 1 February starts at 5:15 pm with the team warmups. Opened by the national anthem performed by Idina Menzel and “America the Beautiful” by John Legend, finally the Big Game was ready to start.

There were also some free or cheap events people could attend which were very popular. Some of the most popular events were Four Peaks Beer Extravaganza at Crescent Ballroom where for as much as $3 fans got drinks, snacks and enjoyed fun activities. They could watch the game airing on the TV screens on the lounge.

Another great event was a free one, the Bud Light Hotel, Live @ the Living Room event, where people got free drinks and snacks as well as live concert starring a guest DJ.

The Puppy Bowl Cafe was a great opportunity for dog lovers and children to come and play with the puppies and maybe even adopt them.

The halftime concert. Katy Perry made such a great concert singing some of her best songs “Teenage Dream”, “California Gurls” and “Firework” among many other songs, wearing a fire dress and flying above the concert scene like a fairy goddess.

The next video will show you the amazing celebration of the Patriots directly on the field. It was a very emotional and beautiful moment.

The commercials were a big part of the event and this year they brought fun yet meaningful messages to the Super Bowl fans. The cost for a 30 second commercial was $4,5 million. Here are the top 5 Best Super Bowl XLIX commercials: